The Husbands of River Song 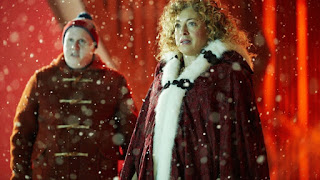 When I watched this story on original broadcast, I adored it. It went straight into the top spot as my favorite Doctor Who story ever. I knew this was probably temporary because it was precisely the story I needed after what had been quite a dark preceding season of Doctor Who, but I loved it.
Now, on re-watch I still love it. It manages to balance fun, silliness, emotion, and excitement rather well. It’s paced beautifully. Douglas Mackinnon’s direction is top-notch.

It is, I think, the perfect end to the story of the Doctor and River Song. Bringing her back now would, like the repeated returns of Rose, be a disappointment. Whether by accident or design Steven Moffat has managed to tell a pretty perfect time-traveling love story. We should be generous and assume it was by design.

I have always liked River Song and I think Alex Kingston has played her to perfection. It will be a shame not to see her again, but don’t spoil this perfect end by bringing her back dear future showrunners. Everything ends. Although – one tiny quibble – I think she’s uncharacteristically obtuse in not realizing that this is the Doctor before she does. However, I forgive that because it gives us the best ‘Hello Sweetie’ in the whole series (and I love River’s attempts to win back some credibility in its aftermath.)

Capaldi is excellent in this too. He gets two of my favorite Capaldi moments in this story: his entrance into the TARDIS – ‘finally’ and his speech at the end to River when he’s ostensibly talking about the Singing Towers but is talking about something entirely different. This is the first Capaldi story I’ve watched for a while and it reminded me once again why I’ve put him at the top of my list of favorite Doctors, which is – in its way – as arbitrary as my list of favorite Doctor Who stories. He can do it all. I think the key to playing the Doctor is the ability to shift from serious to silly in a moment and Capaldi can do that.

The supporting cast, of whom there are not a lot, do a fine job in small parts. Greg Davies gets to be loud and obnoxious; Matt Lucas gets to be funny, silly and a little strange as Nardole and Philip Rhys gets to be handsome as Ramone. None of them are particularly stretched but all of them do what they are asked to do with aplomb.

I should also add some praise for Rowan Polonski as Fleming, the maître d’ of the starship Harmony and Redemption who channels the obsequiousness delightfully and then manages to turn into a total git. River Song gets to give him a lovely verbal execution towards the end of the story.

The idea of the starship Harmony and Redemption, which I overlooked on the first watch, is a horrible and interesting one. It’s basically a place where genocidal maniacs go to relax. Even the crew, according to River, are murderers. I’m not sure it would be the sort of place one would like to hang out for lunch, but the decision of River and the Doctor not to save the ship and, I assume, let most of the passengers die seems to fit this. Perhaps Steven Moffat needed this to make sure that the final moments of that episode allowed the Doctor and River their moment. Having them aboard a ship full of people worth rescuing might have made that a bit messy.

And there we have it. Still vastly enjoyable. I still cried a little. I still think they should have kissed at the end. But let us leave The Doctor and River to spend their long, long night on Darillium in peace.

Posted by PatientCenturion at 19:06 No comments: 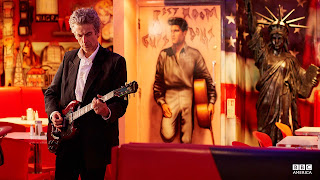 MORE OF THOSE DAMN SPOILERS

Was Hell Bent always going to be a slight disappointment after Heaven Sent? Possibly. It’s still good though. Even though I get the impression that it isn’t held in that high regard by other fans. There seems to be a feeling that having waited so long to see Gallifrey again we only get a flying visit before its all back to the Clara story.

But honestly, what was Gallifrey in Classic Who except for a series of dull rooms and an occasional visit to the Matrix or The Death Zone? We get to see some bits of Gallifrey we’ve not seen before. We get hints at the Doctor’s past and then, instead of staying, the Doctor runs away again. Gallifrey is a very boring place. I mean, whatever the theories for the Doctor’s departure, I’m still going with the original: he was bored, and he wanted to see the universe not just look at it from some intergalactic ivory tower.

I like the way this story is told. Chopping between the story itself and the Doctor’s telling of it in the diner. I like the way it ties up several threads without overloading everything. Clara’s original request to the Doctor all the way back to Asylum of the Daleks to ‘run, you clever boy and remember…’ has more poignancy after this story. It tries to tie up the Hybrid theme but then decides not to bother, but not before Me/Ashildr gently hints that the Doctor might be half-human – presumably on his mother’s side – again. Although this gets the brush off. Sort of.

The question of whether the ‘rescue’ of Clara undoes the emotional impact of her death is an interesting one. I felt – at the time – that it did. But then on re-watch, I felt Clara’s loss in Face the Raven as much as I had on the original watch even though I knew what was coming. And her ‘escape’ isn’t quite perfect, and the Doctor is punished for his hubris as he loses his memories of Clara, which might also feel a bit like retrospective karma for what he did to Donna all those stories long ago. So, in effect, although he rescues her, he’s lost her again. And this time he can’t even grieve for her because he doesn’t know there’s a loss to grieve. It’s as heart-breaking as Zoe and Jamie’s fates at the end of The War Games.

The Doctor’s been heading this way though since The Girl Who Died/The Woman Who Lived after he convinced himself he knew why he’d picked his face and that he was tired of losing people. The example of Me/Ashildr didn’t seem to put him off though. He’s still determined to save Clara. Even though she’s dead. It’s un-Doctorish to an unusual degree. It’s like grief has driven him slightly mad.

I do love the scene that ends with the Doctor saying to Clara after she had found out how long he spent in the Confession Dial, 'I had a duty of care.' Never has a phrase created out of legalese had more of an emotional wrench. It's 'I love you' isn't it?

Again, I love Rachel Talalay’s direction, which brings a real film feel to this episode. Heaven Sent was incredibly creepy and claustrophobic. Hell Bent is more expansive. Plus, we get an old-school original TARDIS interior to gawp at. This is the second TARDIS the Doctor has stolen and the second TARDIS that won’t get returned to Gallifrey as it is now in the hands of Me/Ashildr and Clara.

The interesting thing in this story is how out of control the Doctor is. He even kills someone. Even if that is a Time Lord and they can regenerate. He’s let off a bit lightly there, I think. The General’s regeneration is another little seed sown in the path towards a female Doctor. Ooh and black Time Lords and Gallifreyans* too. This must be driving the non-PC crowd batshit crazy. Good.

In the end, the Doctor is alone again. In his TARDIS with a new sonic screwdriver. Clara and Me/Ashildr have gone off to have adventures of their own, which I’m sure Big Finish will get around to one day. Clara and Me/Ashildr are effectively immortal so how that’s going to work out, in the long run, I don’t know. I suppose both can be killed. I have this image of the two of them landing for the first time and the Time Lords just waiting for them. I mean it is one thing the Doctor stealing a TARDIS but two random aliens running off with one. That’s not going to end well.

Heaven Sent certainly isn’t as strong as Hell Bent but that is true of most Doctor Who stories. It is still a good story told in an interesting way. And just because Gallifrey is back it doesn’t mean we need to pop by every other week. Let it be there. Waiting for the right moment.

Posted by PatientCenturion at 12:56 No comments: