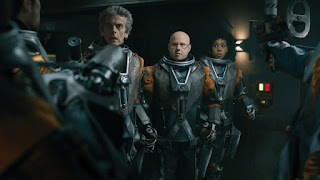 Well, that was delightfully tense and as political as Doctor Who gets. I mean it isn't subtle politics - capitalism is bad - but it is a nice political fable. It is also, kind of, The Wheel in Space or The Moonbase but without the Cyberman. Except 'The Suits' are Cybermen but with an irrelevant organic occupant. They're also a little stupider than Cybermen, but not by much. Or you can think of it as another spin on Zombies - and I'm tired of Zombies if truth be told. The dead stumbling and bumbling around killing the living, but this time not for sustenance but for business.
Oxygen is that Doctor Who classic: the base under siege. And it is a good one too. Not spectacularly original but it ratchets up the tensions nicely adding risk upon risk. People die. People get injured. People live.
Indeed, the pre-title sequence sets things up rather nicely. There's something bad going on out there in space. Then we slow it down and we're back with the Doctor who is talking about the risks of going into space to his students. Nardole is watching. The Doctor, Nardole says, is missing space and it worries Nardole a lot. Because The Doctor is going to do something stupid and leave the vault - and what is in the vault - unguarded.
And lo, that is what the Doctor does. Tut. Tut.
They follow a distress signal to a space station and a lot of unpleasantness follows.
What I like in the early part of the story is that Bill Potts reacts like a normal human being when confronted by, let us say, a standing corpse in a spacesuit. She's freaked out by it. Sensibly she wants to get the hell out of there and go home. Nardole does too. The Doctor points out, in a nice little speech, that there are survivors and that they should be helped.
The writer, Jamie Mathieson, does a good job of reducing the Doctor's options. He cuts him off from the TARDIS, destroys the sonic screwdriver, and - after he does something brave/stupid to save Bill - blinds him. But it takes more than that to stop the Doctor bringing down a nasty capitalist conspiracy.
Our main cast is all excellent, as usual. I love Capaldi's take on the Doctor a lot and he's at his most endearingly arrogant in this story. Matt Lucas as Nardole does his job, as a sort of Jiminy Cricket conscience for the Doctor, well. Lucas doesn't just get to do the funny stuff, which he's good at. But the straight stuff too. But today I am saving most of my praise for Pearl Mackie as Bill Potts. Damn, she's good. She's got such energy and she's got the acting chops, which makes Bill Potts a breath of fresh air. I think she's the companion Peter Capaldi's Doctor has been waiting for.
Charles Palmer's direction is pretty faultless too. He makes the best use of corridors, airlocks, and spacewalks that it is possible to make in a forty-five minutes Doctor Who story. We see a lot of corridors in Doctor Who. It is a running joke. But these ones look solid, claustrophobic, and lived in. Not white and over-lit. That all helps. Michael Pickwoad's production design is up to its usual standards.
Also, I love that red light in the suit. Was that a nod to HAL from 2001 or am I, once again, reading too much into things.
There's a nice little touch with the Bill and Nardole's reaction to Danh-Ren (Peter Caulfield). Danh-Ren is blue. Bright blue. In view of current events though I wonder if it isn't all a tad glib. But they've only got forty-five minutes and they're hammering at capitalism in this story. You can't do all the revolutions at once.
The other survivors - played by Kieran Bew (Ivan), Justin Salinger (Tasker), Mimi Ndiweni (Abby) - are all good solid performances.
I have two quibbles. The first is that the Doctor drops Abby and Ivan off at their company's Head Office to 'make a complaint.' This is an organization that has just killed 38 people. Why are they all so confident that they won't be murdered quietly and everything hushed up? The second is incredibly petty. When, at the end, the 'suits' are giving their oxygen to the survivors Ellie (Katie Brayban) - who we've seen earlier in the story being killed - gives her oxygen to Ivan. But when Ellie died her oxygen had almost run out. So, how much does that help Ivan? I know it doesn't matter a lot. It might be enough to get them through until their inside the TARDIS. But for some reason, it quibbled me.
So, entertaining, tense, and a wee bit of politics without being spectacularly original. That'll do for now.
Posted by PatientCenturion at 10:04 1 comment:

Horns of Nimon - The Drinking Game 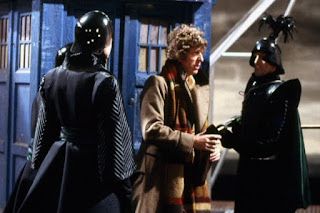 If you follow me on Twitter (@Lokster71) you will know that on Monday May 4th at 19:00 (GMT) I will be doing a Horns of Nimon watch along. Now, I suspect it might end up just being me tweeting into the darkness but I don't mind as The Horns of Nimon is a thing of joy that I find regularly cheers me up.

Thanks to the editors of the excellent The Terrible Zodin Fanzine I have the rules below for The Horns of Nimon drinking game, which might help you enjoy proceedings.

1) Every time the co-pilot says 'Weakling Scum' - Drink
2) Every time someone hides in plain sight - Drink
3) Every time Teka says to Seth, "You'll save us won't you" (or similar) - Drink
4) When the co-pilot's trousers split - Drink
5) When Soldeed says, 'You...you meddlesome hussy!' to Romana II - Drink
6) When Romana says, 'How many Nimon have you seen today?' - Drink
7) When Tom says, 'Well, I hope you get it in the right order' - Drink
8) Each time K9 fires his blaster - Drink
9) When Soldeed laughs maniacally - Drink

10) When Soldeed is dying you should drink for the length of time it takes him to actually stop laughing and die.

I hope you enjoy. And Remember to drink sensibly.

Posted by PatientCenturion at 13:54 No comments: 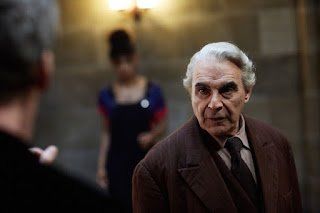