The Horns of Nimon 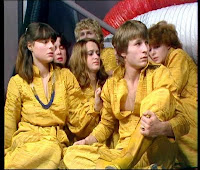 I have a confession to make: The Horns of Nimon is one of my favorite Doctor Who stories. I know that, like most of Season 17, it looks hopelessly cheap. I know that the Anethans are as wet as a bag of Adrics. I know that that there is some hamtastic acting going on, especially Graham Crowden’s Soldeed.

Soldeed's death being one of Doctor Who's most bizarre moments but this I can forgive. Soldeed is quite clearly a lunatic before the appearance of multiple Nimon pushes him right off the sanity express. He's supposed to be the last surviving scientist on Skonnos and I like to think the reason he survived the civil war was that his scientific expertise was in something odd and esoteric, which makes his later rubbishness as a scientist slightly more explicable, especially as there are no other scientists left to contradict him. Until the Doctor arrives.


However, despite all the obvious negatives, there is a kind of wonderful glory about the whole thing to me. Tom and Lalla are on sparkling form, the script contains some great wit and charm and the Nimon themselves have been given a genuine menace totally outweighed by their actual appearance, certainly compared with our friends the Mandrels.

For once the cheap look of the sets is excusable. After all, this is an Empire on the wane. It can’t even do fist-waving and cheering properly anymore. Their ships are old and unstable so the fact that the co-pilot is a dumpy, unthreatening bully desperate to get home even if it means cutting corners makes sense. The co-pilot's regular cries of ‘Weakling Scum!’ hark back to a time when the Skonnon Empire meant something.

They are also a key factor in the creation of my Horns of Nimon drinking game the rules of which can be found in Issue 9 of The Terrible Zodin fanzine, which can be found here: http://doctorwhottz.blogspot.com/ along with some bits of this review, which in true Douglas Adam's style I have recycled and extended.


The relationship between the Doctor and Romana II is one of the great Doctor-Companion relationships. When I was young and a less cynical chap the fact that there were two bright, charming and witty people plotting the downfall of tyrants and monsters armed with just “A teaspoon* and an open mind” was why Doctor Who was so great. No one apologised for being intelligent and witty. Only the bad guys had no sense of humour. It was what the world should be like.

The story itself is just Theseus and the Monitor in Space with a dash of the Trojan Horse thrown in. The Nimon invade by stealth offering gifts to the people of Skonnos. But we learn this is just a devious way of draining a planet of its natural resources before pinging down a black hole to the next likely victim. Beware Nimon baring gifts. We get to see what they do when Romana arrives on Crinoth, the Nimon's previous victim planet.

On Crinoth Romana gets to meet Sezom, the Soldeed of Crinoth. Played by the wonderful John Bailey, Sezom provides both huge chunks of exposition and a little bit of dignity. It is Sezom's story that spells out to us the vampiric nature of the Nimon.


Every time I finish watching it The Horns of Nimon makes me happy and whilst some of that might be down to dumb nostalgia I’d like to think there’s more to it than that. The Horns of Nimon is what brilliant people can produce when they’ve got no money but lots of inspiration.

I know a lot of Doctor Who fans find the Graham Williams era silly and childish. I think it’s generally the opposite. Doctor Who is a family show made for everyone from 6 to 65 but it is at its best when it's adult smart but child friendly. When a story can be enjoyed on various different levels with a bit of terror thrown in. Aimed to entertain children it might be, childish it ain't. Although as The Doctor himself once said, “What’s the point in being grown up, if you can’t be childish sometimes.”

*It should be noted that said teaspoon makes a reappearance in the final episode The Horns of Nimon in a nice little moment between the Doctor and Romana.
Posted by PatientCenturion at 15:54 No comments:

The Nightmare of Eden

The reason it doesn't work is that it falls off the tightrope that a few late Tom Baker stories walk from funny into out and out silliness. And yet this is supposed to be a story about drug smuggling and drug addiction. At a different time in Doctor Who history this might have turned into a dark, dark tale but unfortunately it is in Season Seventeen.

One of the problems is Tom Baker. I love Tom Baker's Doctor. He's MY Doctor. He's eccentric & intelligent but not everything he does works and it takes firm direction to stop him turning some of his ideas into reality. The scene in the final episode where he disappears into the Eden projection and does the 'my arms, my legs...my everything' stuff is so misjudged as to render any tension or fear created by the previous four episodes redundant. There's not much of that anyway.

That is because the main monster threat, the Mandrels are about as threatening as Fozzy Bear. They're badly designed - particularly the legs again; flimsy and frankly risible. The cliffhanger at the end of episode one where one bursts through some polystyrene, arms akimbo and roaring is one of the series most unintentionally amusing moments ever. I actually laughed out loud, which isn't what I suspect the production team were aiming for but as I said perhaps I'm getting old.

The scenes where the Mandrels are seen through television screen massacring some of the passengers should be horrific and terrifying but they're not. They seem to kill people by swatting them casually out of the way, rather than ripping them to bits with claws and they just don't work.

Of course the real 'monster' in this story is Vraxoin, the drug being smuggled by Tryst (Lewis Fiander) & Dymond (Geoffrey Bateman). There is some attempt to convey the seriousness of the problem. The Doctor and Romana talk of whole planets being destroyed by the addiction and we see its effect on two of the Empress's crew, Secker (Stephen Jenn) and Captain Rigg (a woefully underused David Daker) but this part of the story is so anchored it the 'reality' of drug addiction that it seems insulting to tag it on to this silly story.

Lewis Fiander's performance as Tryst features an accent of baffling origins and overt silliness, allegedly encouraged by his friend Tom Baker. It isn't quite as bad a performance as you might think but the ridiculous accent hamstrings him from the off and makes him less of a threat.

Then there are Officers Fisk (Geoffrey Hinsliff) and Costa (Peter Craze). These two idiots are supposed to be police officers but seem to be a dumb as a bag of spanners. I know Geoffrey Hinsliff is a good actor, he was lovely in Image of the Fendahl but in this, he seems totally miscast and out of place. I can see where the seeds for 'Shooty' and 'Bang Bang' the two coppers from the Hitch-hikers Guide to the Galaxy were sown now (well that and Starsky and Hutch).

Finally, we have Della (Jennifer Lonsdale) and Stott (Barry Andrews), the love-lorn couple separated on Eden when Stott is given up for dead. Unfortunately for Lonsdale and Andrews they're just the supporting good guys so they're as dull as ditchwater and neither of them has to stretch their acting chops much.

The design doesn't help. It looks cheap. It looks flat, although Eden's jungle - the little we see of it - is impressively realized. It definitely has the feel of a 'running out of budget, near the season's end' story, which is a shame.

The CET machine is a clever idea, although slightly similar to the Miniscope and the fact that the accident between the Hecate and the Empress makes the CET unstable & allows creatures to escape from it is good.

You won't find yourself bored watching Nightmare of Eden but you might find it annoying, laughable and a little silly, which if you're that way inclined will probably mean it isn't the sort of Doctor Who story you'll enjoy.

[Actually, re-reading my own review here I think I'm incredibly harsh on Nightmare of Eden. Yes, the Mandrels don't quite work but the story as a whole is much cleverer than I give it credit for here. On re-watch, I enjoyed it a lot more and I wonder if I was in a bad mood when I did this review. I found that underneath the patina of silliness was a much darker and smarter story. Ignore this review.]

Posted by PatientCenturion at 12:50 No comments: