The Stones of Venice 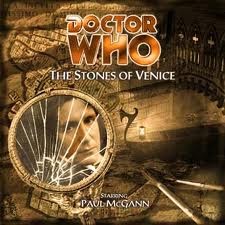 Well, that was bizarre but entertaining stuff. I'm not sure whether Gothic or Baroque is the right word to use to describe The Stones of Venice but it is certainly a little odd.

Venice is dying and a Duke Orsino (Michael Sheard) who has not aged for one hundred years is expecting it to sink beneath the sea as the result of a rather nasty curse inflicting upon him by his lost beloved, Estella. Estella it seems reacted to being lost in a game of cards rather sharply. She cursed the Duke and Venice. Then died. There's a Cult in her memory, of course, led by Vincezo (Mark Gatiss). This Cult expects Estella to rise from her tomb and bring an end to the curse. Alas, things turn out to be much more complicated than that.

Add Venice's aquatic and rebellious underclass, the Gondoliers represented for the most part by Pietro (Barnaby Edwards) and some sound effects; an art collection with one or two odd paintings in it looked after by Churchwell (Nick Scovell), the Duke's curator and the sudden arrival of the Doctor and Charley and things get complicated.

The odd atmosphere is reflected in the guest performances. Michael Sheard does a great job as Duke Orsino, a man who has lived too long and lost too much. He might even be a little mad. This was Michael Sheard's last performance in Doctor Who before his death and it is an excellent final bow. Then there's the oddly intonated Elaine Ives-Cameron as Ms. Lavish, an elderly woman who turns out to have something of an interesting tale to tell. [SPOILER, I suppose] Ms. Lavish it turns out is Estella and she's become a rather bitter and judgemental old thing. She's also an alien. I might hazard a guess and say that Miss Haversham from 'Great Expectations' might be an influence (based partly on the names, partly on her bitterness) but then again I could be making two and two equal five.

Mark Gatiss's Vincenzo is portentous and rather arch. It veers dangerously towards the hammy but then if this were one of those odder horror films with Vincent Price in - like the Masque of the Red Death - you'd expect a little of that. He may also be channeling Hieronymous from 'The Masque of Mandragora'. His disappointment at the end is palpable and his dashing off, probably to form another catacomb head officed cult, is nicely done.

The final episode, although incredibly wordy is quite wonderful. There's a lot of ideas bantered about, a lot of issues resolved and interesting points made about love, faith, class and what can be done to make a difference. The Doctor's line '...there's always something we can do' is made an item of faith for the 8th Doctor, which is ironic considering he's a bit sniffy about humanity's desire to mythologize everything.

India Fisher as Charley is good. She's got a bit more to do in this story as she gets separated from the Doctor and caught up in a rather bizarre plan of Pietro's, who might be the 23rd century Venetian cousin of Baldrick. Charley doesn't put up with being bullied - verbally or physically - and she gets to a nice scene towards the end when she tells Orsino off when he tells her off. She's fun too and nicely mocking of some of the Doctor's pretensions.

Paul McGann is excellent in this again. Doing a wonderful job of getting other people into trouble, especially Churchwell and Charley, before putting all the pieces back together at the end and enabling the Duke and Estella to save the day. In this, the Doctor is more a catalyst than the main driver of the plot. Stuff happens. Occasionally the Doctor turns up to reduce the damage that results from that stuff.

The Sword of Orion 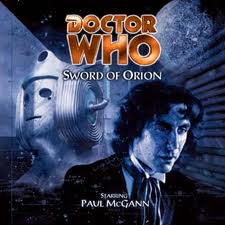 There is no point beating around the bush. This is brilliant stuff. It's a old school base under siege story done to perfection. In fact, just as 'The Caves of Androzani' is 'The Power of the Kroll' but done much, much better this is 'The Wheel in Space' but a new, improved version.

In fact I'd go as far as to say this is almost the best Cyberman story in Doctor Who's history (as I have covered it in the blog up until now) with perhaps only 'The Invasion' and 'Earthshock' to match it. It has the right atmosphere, which is hard to articulate but you know it when it is there. These are Cybermen who feel like a genuine threat.

Whoevers decision it was to go back to a more electronic voice for the Cybermen and to step away from the David Banks school of fist thumping 'Excellent' type should take several bows. These Cybermen are old school and they have Cybermats to, which is always a pleasure. More importantly they seem genuinely terrifying and here audio really helps. There is no way the television series could have a rogue Cyberman tear somewhere to pieces but on audio you can and then you can have the actors react to that. This story makes it clear that Cybermen are a genuine threat and that Cyber Conversion is a horrible process.

Paul McGann is wonderful to. He's given a chance to show what he can do and grabs it with both hands. He's pretty subdued but partial to the occasional moment of smart arse sarcasm. The Doctor's gradual drawing out of Deeva Jansen's (Michelle Livingstone) plan is nicely done and his discussion with her as the story comes towards an end is nicely played by both actors.

India Fisher's does a fine job as companion Charley Pollard too. She's smart, sharp and pugnacious. I like the way they make her struggle to fit sf concepts into the vocabulary of the 1930s: all that talk of 'deathrays'. [If they somehow squeeze the 8th Doctor into the 50th Anniversary it would be nice if he was accompanied by Charley, even if it would probably throw some kind of continuity spanner into the works. But then The Moff does not really believe in continuity as such. It's all canon so why the hell not.]

The guest cast - limited in number - do a good job. Michelle Livingstone's Deeva Jansen is posh and obviously up to something from the off and the way the layers of her character are gradually unpeeled is nicely done. Secrets beneath secrets.

There is a nice pre-credit sequence featuring Mark Gatiss (Whatever happened to him?) as Thinnes and Barnaby Edwards (Whatever etc?) as Digly which sets up the atmosphere of the story pretty darn well. Someone seems to have made a decision to make the non-officers in the crew northern, which I quite like. My favour is Ian Marr's Ike who almost...well I will not spell it out.

Actually I'm a bit confused about what to do about spoilers with the Big Finish audios. I know a lot of these have been out for ages but they are less well known than the Classic TV ones. Should I avoid them? Or just carry on regardless. Answers on a postcard to the usual etc.

Bruce Montague's Grash is pretty good to. The dodgiest and least untrustworthy member of the crew his suspicisions about the Doctor and Charley last almost too long but then you realise that Grash is the type of man who is forced to be suspicious. He'd be in trouble if he was not.

So I'd recommend to those of you who haven't listened to a Big Finish that you give this a spin. It doesn't really require you to have listened to 'Storm Warning' - which introduces Charley - to enjoy it (although there's a couple of references, particularly to Ramsay, that might nip over your head a tad but nothing too drastic) but it is really very very good.


Posted by PatientCenturion at 20:01 No comments: 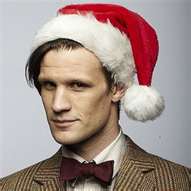 There's not been much Who-ing going on over Christmas here at Patient Centurion Mansions, with the exception of 'The Widow, The Wardrobe and the Whatever', which I watched on Christmas Day. Not my favourite of Christmas specials but perhaps I should be less critical of what is clearly now intend to be the cheesiest and fluffiest episodes of Doctor Who in any given year.

I'm back on the 'Ruthless Doctor Who Watching-Listening Schedule' (TM) from Friday when I'm listening to Paul McGann in 'The Sword of Orion'. For work reasons there will no longer be updates on Mondays or Thursday but the rest of the time I will endeavour to add something.

The New Year sees the release of 'The UNIT Files' on DVD containing Jon Pertwee's excellent 'Invasion of the Dinosaurs' and Tom Baker's less impressive 'The Android Invasion'. My reviews of both stories can be found here and here so feel free to dip in.

Later in January we get a 'The Sensorites' with William Hartnell. I enjoyed this much more the last time I watched it but was not blogging my reviews then. Perhaps when I've bought it on DVD I may add my thoughts on here. Or not.

In the run up to Christmas were rumours of a Doctor Who Movie, which will feature an entirely different cast than the television series. Or it won't. Depending on who you believe, trust or worship. Me, I'll believe it when I see it but actually I've not got too much of a issue about it being a different take on things but as I'll have up to zero influence on the whole thing my opinion is a relevant as the least relevant thing you can currently think of.

Also in 2012 we'll get some new Doctor Who. Probably in the autumn, which I like because to me it is a nights drawing in, cosy warm house type of series but it'll be back rolling in to 2013 and the 50th Anniversary Celebrations. There is much hint dropping going on about what we'll get and much discussion about what we won't get. I'm all for a multiple Doctors story but if we can't have that can we at least give Paul McGann a bit of a run around. I think he deserves something better than The TV Movie. I'd quite like William Russell or Carole Ann Ford (although I know the latter will be tougher to explain away to a new Who audience but it could be fun). Anyway enough of wish lists at this time of New Year's Resolutions.

Here's to 2012 anyway...may it bring happiness, joy to you and a Leela action figure to me on my birthday.
Posted by PatientCenturion at 20:09 No comments: