The Sarah Jane Adventures: Invasion of the Bane 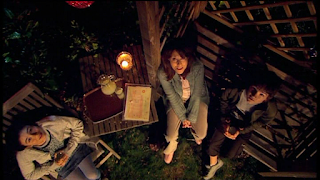 So, the last time we saw Sarah Jane Smith have her own spin-off was K9 & Company. That was back in 1981. Yet here we are in 2007 and Sarah Jane is back. This time with only a small appearance from K9. It says something about the character and Lis Sladen herself that a character who first appeared back in 1973 was able to kick off a series of her own decades later. How many TV characters can you say that about?

And Invasion of the Bane shows Torchwood how to spin-off properly. Perhaps because Torchwood got sucked into this 'adult theme' nonsense it struggled to find itself a tone that worked but The Sarah Jane Adventures hit the ground running.

This feels like Doctor Who, perhaps because it is aimed at children.* But there is more actual tension in this episode than in either Torchwood episode I've watched so far. Plus Samantha Bond's Mrs. Wormwood is far more memorable and fun as a villain. Bond manages to avoid crossing the line into ham acting whilst still being a little larger than life. She's part of why the story works so damn well. And I love the confrontation between her and Sarah Jane as they do some polite but icy verbal fencing.

Also, The Sarah Jane Adventures feels 'real' in a way that Torchwood (so far) hasn't felt. It also feels very Russell T Davies. The first character we met is Maria Jackson (Yasmin Paige) a young girl moving into a new house after her parents split up. It's through her that we get to see Sarah Jane for the first time and get introduced to her life.

The whole story feels very Third Doctor. The Bane Mother isn't a million miles away from the Target book illustration of the Nestene in Doctor Who and the Auton Invasion. Aliens are trying to take over the world through a fizzy drink. What is more Doctor Who than that?

Indeed, what The Sarah Jane Adventures shows is that it is possible to have a female Doctor without scaring the pigeons.** Sarah's very Doctor-ish throughout this story. She's got her Sonic Lipstick, she warns the Bane that if they don't leave Earth she'll stop them and she thinks there should be another way. A way that doesn't involve going in 'all guns blazing'. The children - Maria, Kelsey (Porsha Lawrence Mavour) and Luke (Tommy Knight) - get to be the companions to Sarah Jane's Doctor.

Perhaps that's why it works? It is both new and comfortably familiar. And by Jove it is fun. Something that - so far - Torchwood hasn't been.

It isn't perfect. For example, Maria's mother, played by Juliet Cowan, is just a little too conveniently rude and thoughtless which just feels a bit wrong to me. But any criticism is just minor quibbling really.

There's a great set of scenes when after Luke, Kelsey and Maria have found Sarah Jane's ridiculously sized upstairs room we get a potted history of how Sarah Jane's come to be where she is and it is done both by the actors and by the camera scanning over pictures and drawings. We see a Dalek, the Brigadier, and Harry. Sarah Jane's wistfulness about her time with the Doctor has an emotional heft that really hits home. It's brilliant work by Lis Sladen and the director Colin Teague.

But this is how to do a 'pilot' if that's what it was. It shakes Sarah Jane out of her 'I work alone' mentality, introduces us to the main characters and rolls along at a delightful pace.

I could waffle on for longer but this is a genuine joy.

*That's one for Professor Parry.
**I'm not sure that's the phrase but it's my blog and I'm sticking to it.
Posted by PatientCenturion at 22:05 No comments: 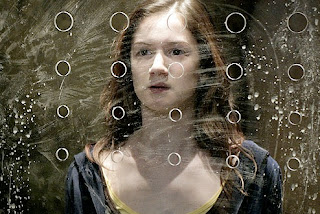 Ah, Torchwood. A chance to explore more adult themes in the Doctor Who Universe and, of course, we get an alien high on orgasmic energy. Because sex is SO adult innit.

So, on Gwen's first day she screws up badly, releases an alien gas creature, which turns out to thrive on the energy of the male orgasm. Not the female orgasm. O no. There's no good reason for this that I can tell but I suppose I'd be foolish to ask for one. This is, after all, Torchwood.

I mean it always struck me that the male orgasm is a slightly less impressive thing than the female one but perhaps I'm looking at it from the wrong end so to speak. (Cough) Of course, to find out that the male orgasm is key we have to have a massive lesbian snogging scene between Gwen and the infected/occupied Carys, which goes on long enough for Owen, Tosh and Captain Jack to have a bit of a perv.

This is pretty awful with exceptions. The key one being Sara Lloyd Gregory who does a stonking job as poor Carys who becomes the host for our Orgasmaterian - as I'm going to call it from this point forward, although Torchwood does a spectacular job of failing to keep her in captivity considering that neither she nor the Orgasmaterian is particularly a fighting creature. Indeed, surely it is the very definition of a lover, not a fighter.

Indeed there's a spectacularly bad moment when - for no obvious reason - Carys grabs the severed hand* and Captain Jack immediately makes it obvious that this is an object he cares about deeply thus giving her all the leverage she needs to escape. It isn't The Barrowman's finest hour.

The other good thing in this story is Eve Myles even though Gwen does a lot of stupid things. There's some fine eye acting from her early in the episode when her error hits home. The rest of the team are still bedding in, although Owen (Burn Gorman) is clearly something of an unlikeable twat. Who thinks 'I'd shag you' is acceptable office banter as opposed to sexual harassment. But hey, it's Torchwood. Tosh (Naoko Mori) hasn't really had much to do so far but she's done what needs to be done as well as can be expected. She does a fine line is awkward, which I like.

Captain Jack is Captain Jack. The Barrowman is The Barrowman. I think, at this point, he's struggling to make the jump from Doctor Who sidekick to the lead on his own show but perhaps that will come as we move on.

Is there much else I can say about this?

It's not great and two episodes in you have to say that Torchwood is struggling to be something more than an adolescent male wet dream of what adult telly would be like.

Still. It could be worse.


*For those not in the Doctor Who loop this severed hand belongs to the Tenth Doctor. He had it cut off in The Christmas Invasion. You all knew that though.


Posted by PatientCenturion at 19:48 No comments: