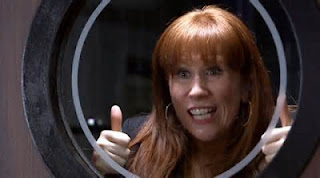 And possibly the best first episode to a new Doctor Who season. Even better than Rose I think. Certainly better than New Earth.

Plus Donna is back and Catherine Tate is absolutely brilliant. After all these mysterious women of recent seasons, I miss Donna. She's an ordinary woman who can cope with extraordinary things. She doesn't pine after the Doctor. She's just one of us, with superb comic timing and great chemistry with David Tennant from the off.

They've turned her down a bit since The Christmas Invasion, which helps I think. But I can't say often enough how much of a breath of fresh air Donna is.

She also seems to bring the best out of David Tennant too who is rather good in this episode, where the threat never seems as terrible as we are meant to think it is. Perhaps because the Adipose are so cute and partly because the one person we see die by Adipose, poor old Stacey (Jessica Gunning), pops out of existence in a less than terrifying manner.

The tone of the episode is pretty light, with the exception of the little bit at the end where a familiar face appears (briefly). Which I think is ideal for a first episode of a new season introducing a new companion.

The main villain is Ms. Foster (Sarah Lancashire) who is an intergalactic super-nanny right down to the 'serious spectacles'. Seeding the Earth is her plan. The Adipose are pretty much innocent as they're just children. How much their parents know is moot but they're certainly ruthless enough about loose ends to eliminate Ms. Foster, which is possibly the only off-tone moment in the whole episode. Sarah Lancashire does a fine job with the part, which isn't surprising really. She certainly seems to be enjoying herself.

There's obviously a completely different set of gun control laws in the Doctor Who version of the UK as Ms. Foster has two security guards happily swinging around huge guns with impunity, which I think is a little unlikely in the office of a diet company. However, that's just one of those minor little quibbles that I find I can pick at without getting too upset about.

Also bonus points for the introduction of Bernard Cribbins as Wilfred Mott (Donna's granddad) who is absolutely brilliant. Plus Jacqueline King does well as Sylvia, Donna's Mum, even if she is a bit of a soap opera nagging wife/mother cliché for most of it.

There's not much else to add really except to say that I haven't enjoyed an episode of Doctor Who so much for ages.

Here's hoping for more of that in Series 4.


Posted by PatientCenturion at 21:11 No comments: 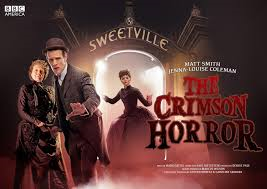 And to quote the First Doctor he should always remember that he is "A citizen of the Universe and a gentleman to boot."
Posted by PatientCenturion at 17:03 1 comment: