The Zygon Who Fell To Earth [Eighth Doctor+Lucie Miller] 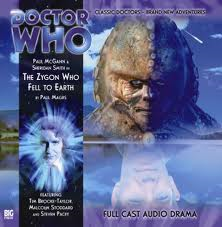 The Zygon Who Fell To Earth starts off as a reasonably light-hearted story with its slightly camp Zygons and its Doctor and Lucie on a Lake District holiday vibe. But it ends with the Doctor colluding in something that I suspect may be a terrible, terrible mistake.

In the end it is rather a dark tale but brilliantly told by writer Paul Magrs.

This review may be a tad short as I don't want to give away too much in the way of spoilers and I think this is a story better enjoyed if you come to it fresh. That may be hard to do since it was released five years ago but hell, I'll give it a try.

The Doctor and Lucie have arrived in the Lake District. Intending to meet up with the Wordsworth & Co the TARDIS has dumped them in the 1980s and they find themselves staying with Lucie's Aunty Pat (Lynsey Hardwick), who we last met in Horror of Glam Rock and who it turns out owns a hotel with her husband, Trevor (Steven Pacey, formally Del Tarrant of Blake's 7).

There are rumours of a monster in Grassmere and as we quickly find out that Trevor, who is apparently a ex-folk singer, has secrets of his own. And his past, in the form of Mr. Urquat (Malcolm Stoddard) and Mr. Mims (Tim Brooke-Taylor, formerly of The Goodies), is catching up with him.

Lucie and the Doctor, of course, get involved. There's danger, derring-do, sacrifice, love and heartbreak to follow plus a fine selection of Zygon sound-effects and talk of organic crystallography.

It's well acted by all concerned, especially Lynsey Hardwick and Steven Pacey, who get to cover the most emotional ground. Tim Brooke-Taylor does a fine line in slightly camp villainy and Katarina Olsson - who hasn't even got a Wikipedia entry for heaven's sake, despite her Big Finish heroics - pops up again.

Sheriden Smith gets to have fun and Paul McGann gets to do a couple of proper Doctor-ish things, which is nice.

I really enjoyed this darkness and all. It's well-paced, well-performed and rather clever. Funny in places and moving in others if you want to dip your toe into Eighth Doctor audio this might not be a bad place to start, even if it does have a call back to The Horror of Glam Rock. You don't have to have heard that to understand the relationships as Aunty Pat does a fine job of explaining them.

Excellent work.
Posted by PatientCenturion at 08:25