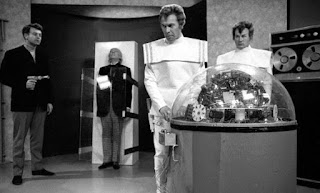 Like The Web Planet, but for different reasons, The Space Museum is a rather unloved thing. It also suffers from a similar problem to An Unearthly Child, which is that its first episode is unsettling and mysterious and ends with a fantastic cliffhanger. The other three episodes are considered therefore to be something of a letdown.

Rob Shearman does a fine job of defending aspects of The Space Museum in a DVD extra so I'm going to try and avoid making too many similar points to him. Mainly because he'll make those points better than I.

Unusually for a story from the dim and distant, black and white Doctor Who past it actually plays with time travel in a quite Moffatesque way. This is definitely a timey-wimey story and part of the story's glory is that the TARDIS crew are never quite sure if they're doing anything to rescue themselves from the fate that they see at the end of episode one. There are lots of arguments about whether it is better to do nothing or do something. Or if their fate can be avoided at all. And as we head into the conclusion of the final episode it does look like their four separate journeys have come together to ensure their doom. But it hasn't. Their interaction with others means that they come through unscathed. They're saved by others.

The TARDIS crew's arrival at the Space Museum, which is on the planet Xeros, is an accident. Xeros is part of the Morok Empire. Its citizens are slaves. Raised to adulthood and then shipped off to serve the Moroks.

The Moroks are a pretty pathetic bunch if truth be told. The Governor, Lobos (Richard Shaw), is a whinging dullard. Bored with his job Lobos longs to go home. Even though their home is also dull. The Morok Empire may have been great once but now it seems to have slipped into some kind of pre-collapse coma. Its soldiers are idiots and cowards. Its Commanders moan about their jobs and blame their underlings for failing to do what they've not been told to do. Its leader is the very definition of the banality of evil. To be honest he's not even evil. He's only obeying orders. He's another soldier doing his duty.

The Xerons themselves are a gang of black jumper wearing, hands-on-hips art students. Well, not art students obviously because they're about to be sent off to be space slaves for the space Empire of the Moroks. But quite frankly they've got the get-up and go of a bunch of office workers on the last working day before Christmas, but without the comedy jumpers. It takes Vicki, who is clearly bored out of her mind, to give them the kick up the arse they so desperately need.

Vicki is great in this story. She starts a revolution.

Which brings me on to a thing. Thinking about this story I realized that what Vicki also starts is a terrible massacre. Once she's broken into the armory and arms have fallen into Xeron hands they go off and raid the Morok barracks. Now based on their shoot to kill policy towards the Moroks we see them kill I don't think they just tied up the troops at the barracks. Every Morok we see after the revolution begins is murdered. So what hope for the Moroks in the barracks?

Obviously, the Moroks aren't nice. They're Imperialists. They invade planets, destroy everything on them, make the survivors slaves and then whack a ruddy great museum on the wreckage. At least the British Empire bought the loot back to London and built a museum there. Can you imagine if we'd built the British Museum on the smoking remains of Mumbai? So the Moroks are nasty but unusually the Doctor doesn't really do anything to stop the massacre. Or even consider it.

He does raise a question to Tor (Jeremy Bulloch) who, whilst taking a break from standing with his hands on his hips, is emptying the space museum of its exhibits and having them destroyed. He wants only creations of Xeros on Xeros, which sounds like the tiniest seed of fascism. The Doctor, at least, says 'don't abandon science altogether', which gets shrugged off by Tor. Have the TARDIS team helped replace a bunch of imperialists with a fascist anti-technology regime? Will Tor let this power go to his head?

Perhaps I'm taking it all far too seriously.

I think The Space Museum has some great comedy in it. I especially love the murder of Barbara's cardigan and the really rubbish Morok soldier - played by Peter Diamond who we last saw as Delos in The Romans - but there's also a delightful scene when the Doctor is being questioned by Lobos. Lobos is showing off about his machine, which will reveal what the Doctor is thinking by reading his mind. The Doctor proceeds to pop this bubble with a series of images that are clearly NOT what he's already thinking. The images are a bit odd it must be said but it is rather funny.

I wonder how much better this story would have been if a director like Christopher Barry had been allowed to run with it rather than Mervyn Pinfield. It does feel like it was meant to be funnier, despite my points about how murderous it might actually be.

So I rather enjoyed this unloved thing. Its four episodes flew by. I chuckled a few times it is true but I wonder if I was meant to chuckle more.

Hartnell gets some good moments in this story, as does Ian who gets to be an action hero again. Poor Barbara is a bit let down by events and her cardigan seems to be more important to the plot than her at points but Vicki is a joy.

And it ends with a cliffhanger into the next story. Never mind the Moroks. Here's the Daleks.*

*Yes, that is a painful, painful 'joke'. Sorry.
Posted by PatientCenturion at 18:04