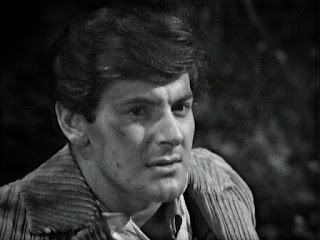 Steven Taylor (Peter Purves) made his first appearance in the final episode of The Chase as a prisoner of The Mechanoids. He escaped the destruction caused after the Daleks had arrived and managed - somehow - to bundle himself on board the TARDIS. His first 'proper' story is The Time Meddler, which also happens to be one of the highlights of the Hartnell era.

The Time Meddler dips Steven into the Doctor's world, which he is amusingly cynical about. Vicki, the Doctor, and Steven team have great chemistry and like a lot of the Hartnell era is often forgotten about entirely when discussions about 'best' TARDIS teams pop up. For me, this is a great TARDIS team.

Alas, it was only to survive three stories: The Time Meddler, Galaxy 4 and The Myth Makers as Vicki leaves at the end of The Myth Makers in unconvincing style. The first of a run of people bundled out of the TARDIS with minimal ceremony. According to Peter Purves's autobiography, 'Here's One I Wrote Earlier' Maureen O'Brien (Vicki) was presented with the news that here contract wasn't being renewed with minimal finesse. It's a disappointing end to a fine TARDIS team.

Steven's next involved in the epic The Dalek's Masterplan, a story that really demonstrates the danger of traveling with the Doctor, especially when face to eye-stalk with the Daleks. Steven survives unlike Brett Vyon, Katarina and Sara Kingdom. This story, filled with death, ends in a victory of sorts for the Doctor but the price paid is a terrible one. So the ideal situation to find themselves in next is Paris on the eve of the St. Bartholemew's Day Massacre.

Here Steven is pushed almost to mutiny at the Doctor's behavior after a confusing and difficult adventure. It is important I think to note that Peter Purves is the lead in The Massacre. It is him that we see most of. The Doctor tops and tails the story but this is an episode of Steven Taylor's solo series. It's a lot of weight to put of Peter Purves's shoulders but he has the charisma to carry it off with aplomb. The sad thing is that the series can't have the courage of its convictions in the end and have Steven leave.

So the end cobbles together a scene that allows the arrival of Dodo to restore things to almost normal. Except that it doesn't. The production team is clearly tired of William Hartnell and each story after this, with the possible exception of The Ark found ways of pushing him out of the story. It means both Peter Purves and Jackie Lane have heavier weight placed upon them. It helps Steven to shine but poor Dodo flounders. It's not Lane's fault. It's the lack of character there in the first place.

The Celestial Toymaker seems to demonstrate that perfectly. It doesn't work because Dodo is stupid. Still, Peter Purves puts in another solid performance as he and Jackie Lane end up doing most of the donkey work in this story.

However, both Lane and Purves are excellent in The Gunfighters, which I'm glad to see Peter Purves enjoyed making. This is one story where I think you could see potential in a Steven, Dodo and The Doctor team, but it is doomed to never quite happen because like Maureen O'Brien before him, Purves was presented with the news that they wanted him out. His departure is at least a little more convincing that Vicki's (and I'll talk about Dodo's shortly.)

There's an implication - which non-television media plays on - that Steven is 'ready' to take on the challenge presented to him at the end of The Savages. It certainly seems a better fate for Steven than him running off with the first 'dolly bird' that takes his fancy. I'd like to think though that after things had been sorted out Steven once more went out into the universe. After all, this was a trained space pilot. In a different era, he might have been Captain Jack.

In the end, Peter Purves's Doctor Who career isn't what he's best remembered for and it is easy to forget Steven's existence, especially as only 17 of his 45 episodes [I'm counting The Chase, Part Six btw] still exist in the archive. Yet, you could make an argument that Peter Purves kept Doctor Who ticking along whilst everyone tried to work out how to give William Hartnell the boot. If Peter Purves hadn't been so capable and charismatic performer this is the point where Doctor Who might have come to an end.

So, here's a rousing 'BRAVO!' for Steven Taylor and Peter Purves.

Now go and listen to The Myth Makers.